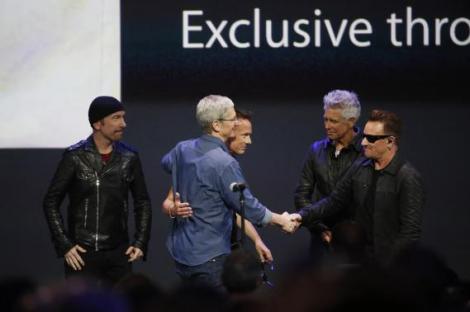 This week my sponsored news threads were abuzz about U2's new free release for subscriber-users of Apple's iTunes. It struck a sour note to my ear.

It wasn't that the music was "given away", that's been done before. That other big (arguably cooler) Euro-rock band did that years ago. It also fits with how most people feel about music anyway. The chorus these days - from young startup bands on up to those gainfully represented by industry titans - is that music is basically free to begin with. 'Use it as an advertisement' to sell other content, placements, tickets, merchandise, "likes" etc. Free is free, and like it or not, it doesn't appear to cost anything to listen to music.

A Match Made in Ones and Zeros.
What unravels the fallacy is the use of the word "free". There is something hip about an extremely successful band gifting its art to the world, but I'm not sure that's what we have here. To call U2's release "free" is to paint it with the same brush we use for independent bands vying for attention, and middle-market bands looking to sell t-shirts and concert tickets. In the latter two we have artists advertising their own creative works with the free dissemination of their recorded music. U2 is just hawking shit for Apple. This isn't news. I don't have to Google to be reminded of U2's long commercial relationship with Apple; TV ads, exclusives, and an iPod readily come to mind.

"A Gift to You*"
That's not what bothers me. I have no problem with U2 and Apple working together this way. It makes a lot of sense, the benefits to each are clear. However, they've co-opted and misused the phrase "free music" (don't get me started on how cynical it is to call this a "gift"). For their massive press release to portray this no-cost release as generosity signifies that, to the state of affairs for the vast majority of musicians today, U2 and Apple are tone deaf.