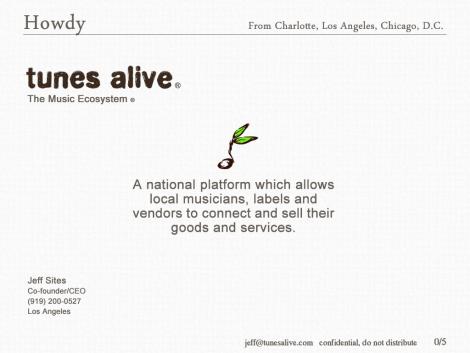 Five years ago today Tunes Alive was born, on paper. It was an exciting, dare I say “amazing” time for me. It went a little like this:

Prelude 2007 was going to be a last big push for music. I had moved to Los Angeles in 2002 with no job, no place to stay, (yada yada more on this another time) all to be able to play music with the most diverse musical talent on the planet. I found limited success, played with two great bands between 2004 and 2006, and started one of my own around 2006 - 2007. Not much came of it - as measured in money anyway - and I wouldn’t trade those days for something like money.

2007 was the year that I got married. It was also when I was honing some thitherto-hidden business and technical skills. In 2008 I was awarded a scholarship to an MBA program, so I took it as an opportunity exit the 9-to-5. With the pursuit of a degree as a safety net, I set up as an independent IT consultant. Entrepreneurship level 1.

Tunes Alive
In 2009, after a year of slogging it behind the scenes at other peoples’ businesses and going to school full time in the evenings, I wanted to try something different. It needed to be about music. Nate and I had been throwing around ideas, for a while by then, on how to improve the business of music for artists and fans. We convinced each other it was feasible, and with a notebook of ideas, we founded Tunes Alive LLC.

We spent a lot of time laying the groundwork in the first year, but nothing really happened until the start of 2011. By then we’d raised some money and built a team. I had finished the business program, and with two newborns at home, had all the sleepless work-able nights I could ask for.

In the end however, 2011 was a bust. The team was not nearly as qualified as they let on. More importantly, we weren’t (until late in the year) qualified to ask the right questions to realize what they were doing. Entrepreneurship level 2.

2012 was the turning point for us. We assembled a new, thoroughly-vetted team. Even with a hiccup in development early on (easy to call it a hiccup now... ) we managed to pull it together and launch the foundation of what Tunes Alive is today. By the end of the year we were working with many great artists, and rapidly making plans for the next releases. Life was good.

Then we had to raise more money.

2013 felt a lot like starting from scratch. My partners had to devote more of their attention to paying the bills, and by this time you can see how grateful I am for my wife’s support in all this. For Tunes Alive, I had to go about learning an entirely different skill: fundraising. Entrepreneurship level 3.

Last year was a ton of work. I gave many pitches, and produced many different decks, each with multiple rounds of revision. Many were the late nights, conference calls, meet and greets, and there was a whole hell of a lot of getting grilled by would-be investors. We continued to build our artist and vendor support services, including an interview series, for Tunes Alive. Ultimately, we found some success. It was not as much as we were looking for, but we are still running to this day (albeit with a known bug or two).

For Tunes Alive, this year has been a quiet one so far. With several years of programming and web experience, an MBA, and all fear of rejection and difficult meetings burned out of me, I made the move to start Charles Creative; cashing in on some of the equity I’d built in myself. Entrepreneurship level 4.

I would also like to note a return to actually making and performing music. Holy crap does that feel great. More on that in another post.

Look, I’ve glossed over some difficult days. We've had to say goodbye to some good folks on terms friendly and not-so. But what has followed has always been new opportunities. We have a new partner (or two), and no shortage of new ideas. We’re laying out the framework of the next iteration of Tunes Alive, though it may be a while before it sees the light of day.

The path ahead will not be without mistakes. Matching ideas with the means to execute them will be a major hurdle in the process. By investment, incubation, acceleration - or some day by Charles Creative - it will happen. That’s what I’m supposed to say, and it rings true. After all, being an entrepreneur takes a great deal of faith and optimism. You have to believe in yourself and in those around you. That alone isn't enough though. Neither (I’ve found) is hard work, the right mix of mentors, the perfect deck, or even great timing.

What’s required is the ability to apply a skill or resource, which you possess, to creating a solution to a problem faced by others; turning that into a business; and the will to see it through. There it is: Level 5.

The future I see is bright.